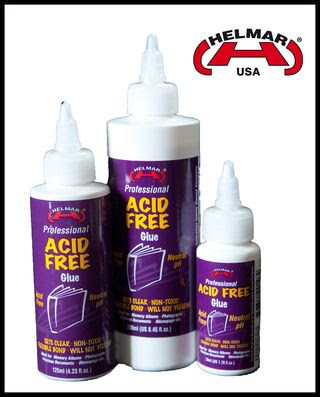 With the holiday season upon us I am excited to share this fun project I created with Helmar products. A holiday wreath. I love putting my Christmas wreath up each year after making it and making one that can last year to year with some paper, a yard sale wreath and some of Helmar’s wonderful Adhesive seems so perfect,,,,,,but do you ever wonder why we put wreaths up during the holidays?

The term "Wreath", curiously enough, is linked to our word "Wrist", with both terms forming a continuous physical circular shape. It also came from Middle English's "wrethe", meaning a twisted band or ring of leaves or flowers in a garland.
Wreaths have been used symbolically for centuries. The circle or ring shape is symbolic of eternity or eternal life, because the shape has no beginning or end. Back in ancient Rome, this symbol became so powerful that people used decorative wreaths as a sign of victory. Some believe that this is where the hanging of wreaths on doors came from.
Putting plants into the symbolic circular shape symbolizes the strength of life overcoming the forces of winter. Wreaths and other decorations during long winters often consisted of whatever natural materials looked attractive at this bleak time of year. People used candles, fires, evergreens, hollies, berries, and forced blossoms to hold on to the promise of spring.

A Brief History of Holly and the Christmas Wreath

The ancient Druids are the first society in known history to have worn sprigs of holly and mistletoe. These priests of yesteryear believed that holly, with its glossy, shiny prickly leaves of green adorned with red berries, remained green all year due to their magical properties. The Druids considered Holly sacred. Many speculate the holly berries have given us our green and red colors of Christmas.

Combining the symbolism of the wreath with the believed magical powers of Holly, the Romans exchanged Holly Wreaths as gifts. Once Christianity took hold in Rome, Holly Wreaths became Christmas Wreaths as part of popular holiday decorations, but mistletoe was considered "pagan" because of its mystic properties. In fact, in 575 A.D., a German Catholic Bishop forbade all Christmas greens and condemned them as "dangerous and heathen". Churches did not see their likeness again for centuries.
In the 16th century, the word "Holly" appeared in writing for the first time, used by Shakespeare. By the 17th century, holly had become a grander part of Christmas celebrations, the Christmas Wreath, and holiday decorations once again. The shape of the wreath symbolized the crown of thorns put atop the head of Jesus Christ, as well as the resurrection and eternal life. Holly and Christmas Wreaths came to stand for peace, joy, and contentment.
To add color to Christmas Wreaths, colonists used pomegranates and other colorful fruits. Pomegranates, in particular, indicated wealth. Other items used to decorate Christmas Wreaths include seashells from nearby beaches, pinecones, and imported items. The colonists celebrated the Christmas season for 12 consecutive days (this is where we get the "12 Days of Christmas"). At the end of the 12th day, on January 5th, the homeowners took down their Christmas Wreaths and other holiday decorations. They removed the fruit and added them to the holiday feast, enjoying the bounty of summer in the heart of winter.
I love learning the history of things we just take for granted and to find their origins. I puts a smile on my face to know how long that wreaths have been used as a decoration during this festive season of giving.
I started by cutting out using the Spellbinders Paper Arts Grand Calibur pile of Rose and Carnation Creations die flowers and leaves by Donna Salazar for Spellbinders. 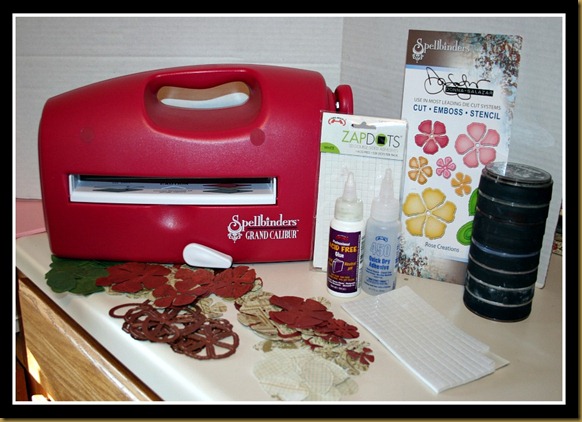 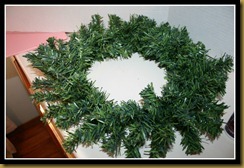 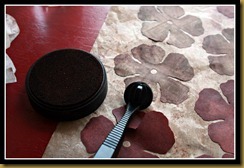 I brushed on Helmar Gemstone Glue and sprinkle Clearsnap’s Fairy Dust Glitter on the branches giving a frosted effect. 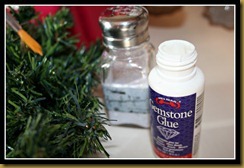 I sprayed the backs of the flowers with Clearsnap Smooch Spritz by Donna Salazar. 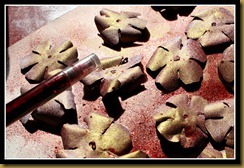 I adhered the layered flowers with Helmar Zapdots and a jingle bell in the center of each using Helmar Gemstone Glue. 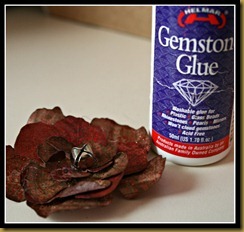 I attached the flowers to the Wreath with Helmar’s 450 Quick Dry. 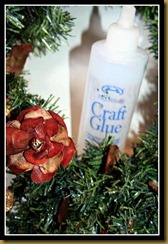 And did the same to the inked die cut leaves. 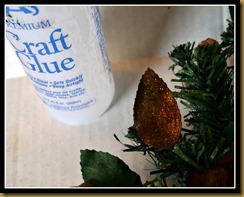 I think it would be the perfect hostess gift for Thanksgiving that could be used though out the Christmas season. 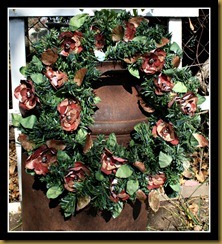 t==
Product Supply List
Helmar Zapdots
Helmar 450 Quick Dry
Helmar Gemstone Glue
Spellinder’s Paper Arts: Grand Calibur and the Rose and Carnations Creations Dies
Antiquities Paper by Donna Salazar for GCD Studios Clearsnap Fairy Du st Glitter, Mixed Media Inx and Smooch Spritz by Donna Salazar
With the upcoming holiday next week may I wish you a very Happy Thanksgiving! I can not wait to share my next project but until then…..BE CREATIVE!
Karen Taylor
"Christmas is not as much about opening our presents as opening our hearts." - Janice Maeditere
Posted by Karen at 2:16 PM