Today I will be sharing a Tutorial for making a Birthday card keeper that you can put all the cards you get in and make one...or give one as a gift each year so you always have them to look back on and remember the year that you received them.
Do you know how card giving was started?
The custom of sending greeting cards can be traced back to the ancient Chinese, who exchanged messages of good will to celebrate the New Year, and to the early Egyptians, who conveyed their greetings on papyrus scrolls. By the early 15th century, handmade paper greeting cards were being exchanged in Europe. The Germans are known to have printed New Year's greetings from woodcuts as early as 1400, and handmade paper Valentines were being exchanged in various parts of Europe in the early to mid-15th century, with the oldest Valentine in existence being in the British Museum.[2]
By the 1850s, the greeting card had been transformed from a relatively expensive, handmade and hand-delivered gift to a popular and affordable means of personal communication, due largely to advances in printing, mechanization, and a reduction in postal rates with the introduction of the postage stamp.[3] This was followed by new trends like Christmas cards, the first of which appeared in published form in London in 1843 when Sir Henry Cole hired artist John Calcott Horsley to design a holiday card that he could send to his friends and acquaintances. In the 1860s, companies like Marcus Ward & Co, Goodall and Charles Bennett began the mass production of greeting cards. They employed well known artists such as Kate Greenaway and Walter Crane as illustrators and card designers.
Technical developments like color lithography in 1930 propelled the manufactured greeting card industry forward. Humorous greeting cards, known as studio cards, became popular in the late 1940s and 1950s.
In the 1970s Recycled Paper Greetings, a small company needing to establish a competing identity against the large companies like Hallmark Cards, began publishing humorous "whimsical" card designs with the artist's name credited on the back. This was away from what was known as the standard look (sometimes called the Hallmark look.)[citation needed] By the 1980s there was a thriving market for what were now called "alternative" greeting cards, and the name stuck even though these "alternative" cards changed the look of the entire industry.
The largest recorded number of greeting cards sent to a single person went to Craig Shergold, an early beneficiary/victim of an Internet chain mail.
During the 1980s, the trend began to turn, with consumers increasing looking for greeting cards that were differentiated from the standard offering. In the late 1990s the market was clearly beginning to separate in to three different segments:
•handmade and premium cards
•mass-manufactured cards
•e-cards
Common cardmaking materials include: cardstock, stencils, markers, vellum, tissue paper, glue, rulers and t-squares, rickrack, foil, sequins, beads, ribbon, and more.
Other materials that can be used in cardmaking are brads, eyelets, tea bag medallions, and buttons. Brads can be used to hold the four corners of one piece of cardstock on top of another to create a layered effect. Eyelets can be used to draw a piece of string or ribbon from one side of the card to another. Tea bag medallions are a type of origami that makes a wonderful decoration for the front of a card. Pretty shaped buttons make nice additions to a design that is stamped on the card.
BUT we all know a thing or too about the above!! 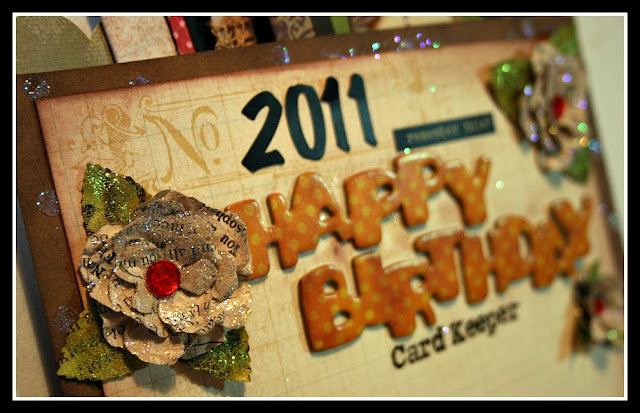 I love to look back at my old cards and now my new especially since I receive so many beautiful hand made one. TREASURES all of them. When I read a card from ten years ago it STILL puts a smile on my face~
To make my card holder: 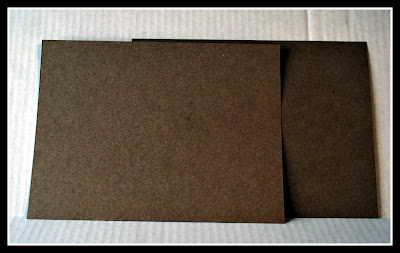 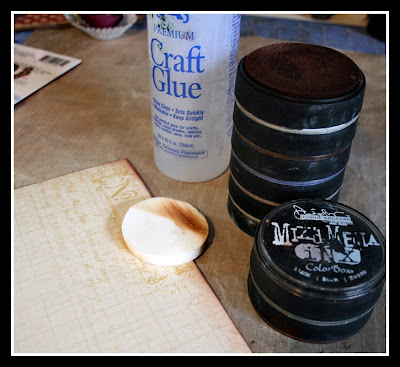 I inked all edges. 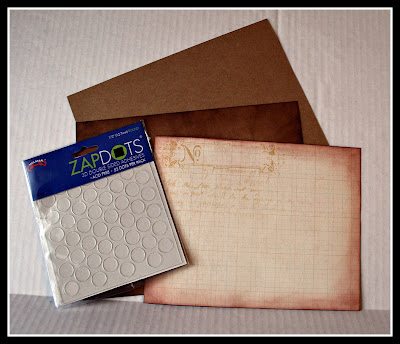 I adhered the patterned paper to one piece of the Kraft paper with Helmars Clear Zapdots and the two pieces of Kraft papers together on the very edge leaving one long edge open, 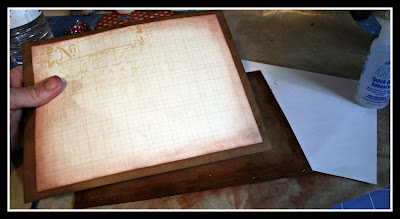 I then cut out a border using Spellbinder Edgeabilities die out of coordinating patterned paper. 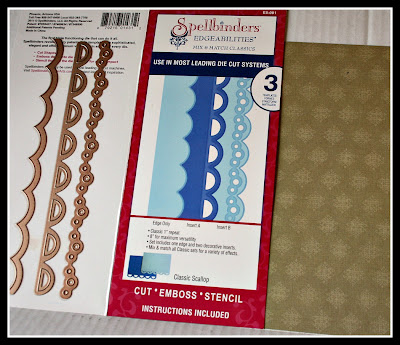 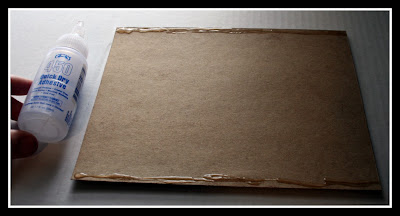 I then adhered it to to the back top and bottom and front top and bottom of the Kraft paper with Helmar 450 Quick Dry adhesive making sure not to get glue on the upper scallops so it will still have an unglued opening, 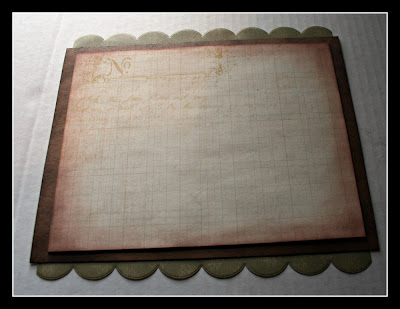 I then added "Happy Birthday" to front and "cardkeeper" with mini alphas. 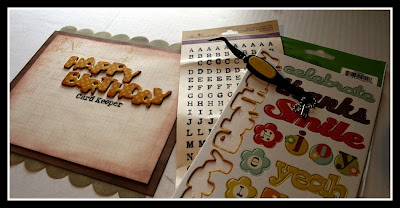 I cut some Spellbinder dies by Donna Salazar (Rose Creations) out of old dictionary and adhered with Helmar Craft Glue as I stacked them...I then brushed Helmar Gemstone Glue on the flowers. 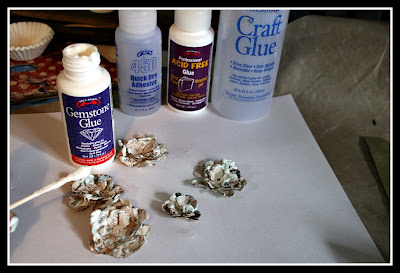 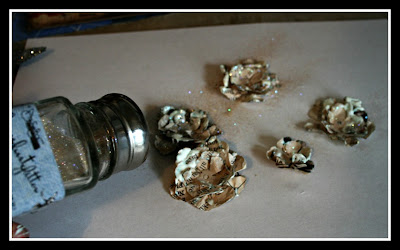 I sprinkled them with Fairy Dust Glitter by Donna Salazar and put a dot of the Helmar Gemstone Glue in center and added a Want2Scrap bling in red to the center of the flowers. 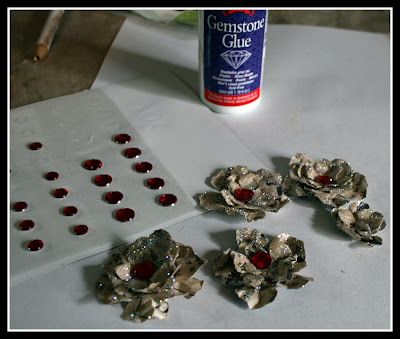 With only a small amount of Helmar's Gemstone glue left in this bottle : (
Wait it gets happy ...I put glitter in the bottle. 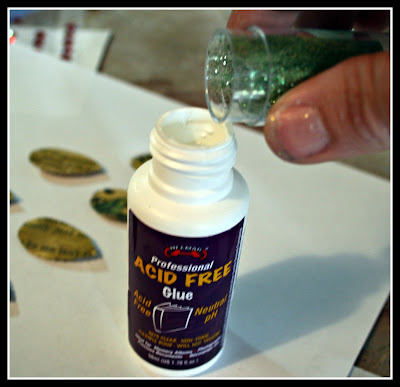 Mixed and painted the glittered glue on my leaves!!
Told you it was a happy ending : ) 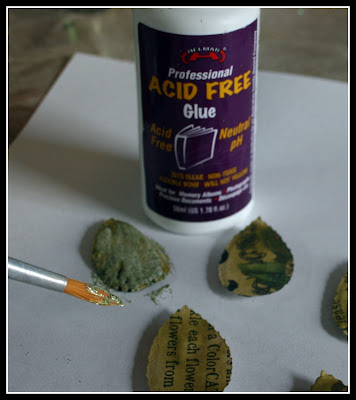 I then added the finishing touches along with some wonderful Birthday cards and smiled as I pulled each one out and read those special words and now not only do I have a place to keep those memories bedsides in my heart. 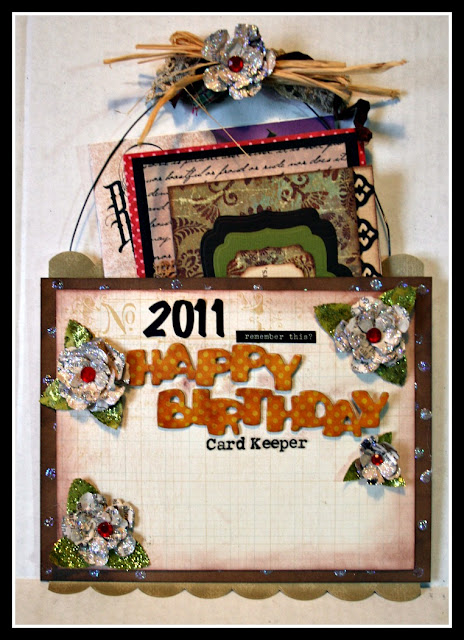 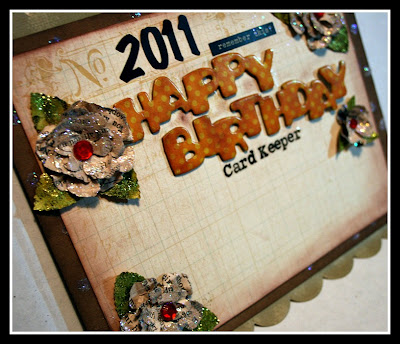 I think I will make one for Christmas too!
Posted by Karen at 12:18 AM

WOW Karen this is one awesome project and tutorial I am both impressed and inspired by your creativity. Brilliant work.
Hugs
Lorraine x